This post will explain how you can easily create protocol dissectors in Wireshark, using the Lua programming language. This is can be useful when you’re working with a custom protocol that Wireshark doesn’t already have a dissector for. If Wireshark looks like this for example

it’s hard to tell what the various bytes in the data part represents.

Wireshark is written in C, and dissectors for Wireshark are generally also written in C. However, Wireshark has a Lua implementation that makes it easy for people who are unfamiliar with C to write dissectors. For those who are unfamiliar with Lua, it’s a very light-weight programming language that is designed to be implemented as a scripting language in applications to extend their functionality.

The downside of using Lua is that the dissector will be slower than a dissector written in C.

Before we start writing the dissector, let’s go through a crash course on Lua. It’s not important to know the language in detail, but we must know the basics.

They can have functions and are generally very similar to objects in JavaScript.

That is i = first, last, delta. break can be used, but continue cannot.

then the functions func1 and func2 belongs to the table (object) a. Using colon is syntactic sugar for passing the object itself as an argument to the function. That means a:func1() is similar to a.func1(a).

That’s the important stuff. You can read the Lua 5.3 Reference Manual if you care about the details.

If you go to Help –> About Wireshark –> Folders, you’ll find all the folders Wireshark reads Lua scripts from. Choose either the Personal Lua Plugins, Global Lua Plugins or Personal configuration folder. E.g. C:\Program Files\Wireshark\plugins\2.4.2 on Windows. The script will be active when Wireshark is started. You have to restart Wireshark after you do changes to the script, or reload all the Lua scripts with Ctrl+Shift+L.

I’m using the latest version at the current date. What I’m doing here might not work on earlier versions.

The most interesting protocol to investigate in this post would probably be a custom one that Wireshark doesn’t know of already, but all the custom protocols I’ve worked with have been work related and I can’t post information about them here. So instead we’ll look at the MongoDB wire protocol.

(There is already a Mongo dissector in Wireshark, but I will not use that one.)

According to the specification linked to above, the MongoDB wire protocol is a TCP/IP protocol using port number 27017. The byte ordering is little endian, meaning the least significant byte comes first. Most protocols are big endian. The only difference is the ordering of the bytes. If we had an int32 for example, with these bytes: 00 4F 23 11 in big endian, then the little endian version would be 11 23 4F 00. This is something must to take into account when writing the dissector.

In this post, I’ll only take a look at the header of the protocol. It looks like this

Setting up the boilerplate code

Let’s start by setting up some of the boilerplate code that’s needed in all dissectors:

We start my creating a Proto (protocol) object and call it mongodb_protocol. The table constructor takes two arguments: name and description. The protocol requires a fields table and a dissector function. We haven’t added any fields yet, so the fields table is empty. The dissector function is called once for every packet of our type.

The dissector function has three parameters: buffer, pinfo and tree. buffer contains the packet’s buffer and is a Tvb object. It contains the data we want to dissect. pinfo contains the columns of the packet list and is a Pinfo object. Finally, tree is the tree root and is a TreeItem object.

Inside the dissector function, we start by checking the length of the buffer and then returning if it’s empty.

As mentioned before, the pinfo object contains the columns in the packet list. We can use it to set the protocol name when we receive a packet of MongoDB type. On the script’s first line we set the name of the protocol to be “MongoDB” (by passing the name to the constructor). We set the protocol column name here

and the protocol column name changes from TCP to MONGODB: 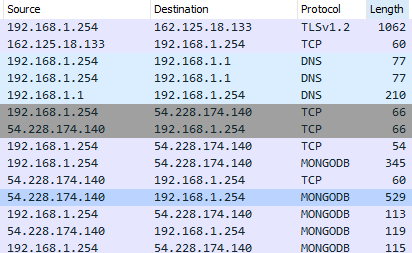 We must then create a sub tree in the tree structure found in the Packet Details pane. It done by adding an additional tree item to the tree object that was passed as an argument to the dissector function.

The string is the name of the sub tree. Without having added any fields it will look like this:

Finally, we must assign the protocol to a port. In my case, I’ll use port 59274, because that’s the port I use to connect to the Mongo database.

"udp.port" can also be used, if the protocol uses UDP rather than TCP.

The script already runs at this stage, but it isn’t doing anything useful. For the script to do something useful we have to add the fields that we want to parse. Fields are made by creating ProtoField objects. We can start off simple by adding only the first field. The first field in the MongoDB wire protocol specification is the message length, which is an int32.

We add the following above the dissector function:

ProtoField has several types of functions we can use: uint8(), uint16(), string() and so on. We have to use the one that matches the specification. A list of all the functions can be found here.

We then add the field to the fields table of the protocol:

and finally add the field to the sub tree:

I use add_le rather than add, because we are working with a little-endian protocol. If the protocol was big endian we would have to use add. The function takes two arguments: the field we made further up, and a buffer range. We can get a range of the buffer by using the range function that is a part of the buffer object. buffer(offset,length) is the short form for the range function. buffer(0,4) means we want to start at the first byte, and then take 4 bytes. The reason we want to start at 0 is because we’re dealing with the first field in the header. We take 4 bytes because that is the size of an int32.

After reloading the Lua script with Ctrl+Shift+L Wireshark should look like this:

We can see that it parses the messageLength correctly. We can also see that we don’t have to parse all the fields for this to work. We can gradually expand the plugin as we go.

The three other fields in the header are also int32s. We can add them just like the we did with the message length field. The final script for this part will therefore look like this:

and we are happy for now. In the next part I’ll look at debugging and more advanced parsing methods. Right now, we only see the numeric values of the opcodes, but the opcode name would be more interesting.